In the late 1950’s, a ground-breaking TV show caught my attention because of the very feature that made it revolutionary. It was just a private-eye show, but instead of using canned music for background it made the music part of the show, and even more unique, that music was jazz. This confluence of things occurred at a time in my life when I was first beginning to appreciate that form of music, so I was an instant fan.

Peter Gunn made its debut in 1958 and was an early creation of Blake Edwards, who is probably better remembered now as a film director and producer — and as the husband of Julie Andrews. He designed the show

around a detective who was suave and smooth in the Cary Grant mold, and hired Craig Stevens (who actually sort of looked like Grant) to star as the handsome hero.

The well-dressed gumshoe dropped in regularly at a jazz club called Mother’s, where his girlfriend (played by Lola Albright) was the singer fronting a small jazz group, and it was a natural setting for the music that permeated the show. The distinctive theme song is still probably the best known piece from the show but there was lots of original music flowing through almost every scene, and it all bore the signature of composer Henry Mancini.

Mancini’s brand of jazz might have seemed a little tame to those who compared it to harder-edged stuff, but it was always musically outstanding, and he ended up with several best-selling albums based on the show. But although Mancini was a gifted composer who had a prodigious career, there was another musician involved with the show and its music, and he’s been a little less visible. And he’s someone who – in the eyes of some, at least – has more of a jazz pedigree than Mancini. 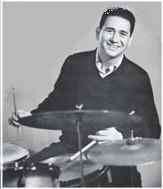 Shelly Manne was a drummer who started playing in big bands in the 1940’s, gaining a lot of experience with different ensembles before evolving into a leader of his own small groups. Eventually he formed Shelly Manne And His Men, and was a well-liked and respected fixture on the jazz scene for many years. When Peter Gunn came along, he soon found himself involved with the show, and even appeared on camera occasionally as part of the group playing at the fictional nightclub, Mother’s.

Manne had a lot of talented musicians in and out of his group through the years, including Herb Geller, Victor Feldman, Conte Candoli, Jimmy Giuffre, Richie Kamuca, and Ralph Pena. The group had many successful albums, including some with jazz versions of movie and Broadway music, but my favorites were their Peter Gunn albums. Those albums took Mancini’s gorgeous compositions and added a tougher, purer jazz sound. A good example is “Dreamsville”, a ballad that ended up as a classic recorded by a lot of different musicians, but most pale when compared to Manne’s version with a glorious solo by Geller on alto sax.

Manne stayed pretty active in music through the next couple of decades (and even did a little more acting) but died in 1984 at age 64, leaving behind a lot of friends and a legacy of good jazz.