An objective listener would probably not have been too impressed when Ricky Nelson began to sing on the Ozzie And Harriet TV show in the 1950s, but I certainly was. He had always seemed to me to be just a regular kid, a lot like me, even if his family and mine were actually pretty different. (After all, my Dad had a regular job…unlike Ozzie.)

Ricky was the mischievous one, the opposite of his conservative older brother Dave, and seemed to get all the best lines on the show, cracking wise and making everybody laugh. I imagined that I had the capacity to be like that, so it’s not surprising that I identified with him even before he began to sing. I even tried to imitate his spiky crew-cut, which I thought was just about the coolest thing I’d ever seen.

I’m sure I wasn’t the only kid in America who felt a kinship with Ricky, and I guess that’s a tribute to Ozzie’s craftiness with the show. He made the public think that his family was just like ours, only smarter and better-looking, and living in a world where the biggest problem was deciding when to paint the fence. It was perhaps a typical portrayal of a TV family in the 1950s, but it succeeded — and made a lot of loot for the Nelson family.

Ozzie’s promotional talents continued to be proven as he helped get Ricky off to a good start with his singing career. Growing up as part of a beloved TV family made him a perfect candidate to succeed as a sort of “anti-Elvis”, someone the kids could enjoy listening to while their parents felt less threatened than they would by Elvis or one of the other bad boys. And if Ricky was only so-so as a singer in those early days, did it really matter that much? He was in the right time at the right place, and had the looks – even the little Elvis lip thing – going for him.

His first hit, “I’m Walkin'”, was a Fats Domino R&B tune, but Ricky’s version was much easier for middle America to get behind. (This was the same pattern followed by other “safe” singers, such as Pat Boone, who made mainstream hits of many R&B songs.) Ricky’s early songs were mostly a kind of hybrid rockabilly sound, and were bouncy and pleasant. Kids responded in droves and he became a big star. 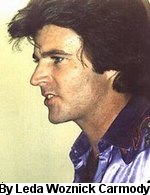 He continued to churn out hits for a number of years, but a funny thing happened as he got older — he also began growing up musically. He brought on board the best accompanists, such as the great James Burton on guitar, and he continued to mature as a vocalist. Along the way he changed from Ricky to Rick, but he wasn’t so serious that he forgot his rockabilly side. One of the best examples being “Hello, Mary Lou”, which featured Burton’s outstanding solos. And I can still remember the first time I heard “Poor Little Fool” on the jukebox and told a friend that it was going to be a hit. That might just be a fluke of my flaky memory, but damn that’s a good song. And finally, it was also during this time that he brought out “Lonesome Town”, his attempt at something a little more serious but a song that most people completely didn’t get, even though it was a hit anyway.

He had a lot of ups and downs during his relatively short career but I’m not going to go into all that. There’s a wealth of info out there and I’d encourage you to read more about this fascinating singer who had a tragic and early death. (One good source is his page of the Wiki.)

As the years have passed, he’s been accorded more and more credit for his contributions to early rock music, but remains largely unappreciated. As for me, I still fondly remember the early days when things were much happier for him, but my most poignant memory is heavy with irony. It’s thinking about his last hit, “Garden Party”, which he wrote as a protest to being booed off the stage by disappointed fans — who wanted him to play the old stuff again.

5 thoughts on “Ozzie And Harriet – Ricky And Me”