I’ve never had a brother, so although I’ve always wondered about the dynamics of the relationship, I’ve had to do it without an insider’s knowledge. However, it always seemed to me that brothers could be each other’s best friend – and worst enemy – and often at the same time.

Brothers have been around the music business for a long time too. Even narrowing the focus to swing music still yields numerous examples, and within those you can find almost every kind of brotherly relationship. One type was that practiced by a few bandleaders – Benny Goodman for one – who provided a job for a a lesser-known brother. The result of that situation was probably no different than that in any other businesses that employs siblings and one has a position of

authority — a potential for conflict.

In other instances, both brothers achieved some success and things went a little smoother. And speaking of smooth, crooner Bing Crosby and his brother Bob got along pretty well, and even though their careers diverged, with Bing becoming a huge singing star and Bob (who was a pretty good singer too) becoming a successful bandleader, they continued to occasionally work together.

Les and Larry Elgart have spent quite a bit of their career together in one way or another, either as sidemen in bands during the early years, or later by forming their own group. However, they also 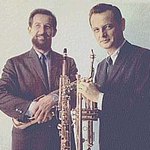 had long periods of going their separate ways, and Larry – who was probably the better musician – had success as a bandleader on his own.

And then there were the Dorseys. I can’t imagine anyone who has any interest at all in big band music who wouldn’t know about Tommy and Jimmy’s explosive history. There’s a ton of information available online about the fascinating careers of these giants of the swing era, and I encourage you to read it — but I’ll give a brief recap.

The Dorsey Brothers Orchestra was formed in the early thirties, although they’d irregularly played together all through the previous decade in every milieu from vaudeville to early jazz groups. The brothers did pretty well with their new band but argued endlessly, and in the mid-thirties Tommy (the younger brother) left and formed his own band. Jimmy renamed the band after himself, and for a lot of years both brothers’ bands were

tremendously popular. They eventually reconciled as brothers, but kept their bands separate until the popularity of big band music began to decline in the fifties. At that time, they once again decided to become the Dorsey Brothers Band, and continued to entertain their fans, even starring in a TV show. Unfortunately, both died within a few years — just seven months apart.

As the sons of a music teacher, Tommy and Jimmy were both solid instrumentalists (something that couldn’t always be said about bandleaders) and a lot of their biggest hits featured themselves as the main soloist — Jimmy on alto sax or clarinet, and of course Tommy on trombone. If you’d like to hear Jimmy, here’s one of his better-known tunes, a song that I enjoy a lot, “So Rare“. It’s from the album Jimmy Dorsey Plays His Greatest Hits.

I guess brothers in swing music are no different than brothers in any other circumstances — part of a complex, volatile, but potentially rewarding relationship.