Here’s a test for you. If someone says “clarinet player”, what’s the first name that comes to mind? I’d bet the farm – if I had a farm – that you’d answer with the name of the guy who was known as the King of Swing. But he was also someone I once considered to be my musical doppelganger, in ways that go beyond what most people would consider sane and normal.

When I first became interested in swing music and then discovered Benny Goodman, I soon realized that he and I had a lot in common. Both born in Illinois – check. Horn-rimmed glasses – check. Both sorta big guys – check. Played clarinet – check. Played it flawlessly – well, four out of five isn’t bad. Of course, Benny was born over 30 years before me so I guess we couldn’t really be twins, but still. (I just thought of something else we had in common — our initials were the same, or at least they were if I go by my nickname. And by the way, look at the picture and you’ll have a clue why most of my nicknames have started with “Big”.) 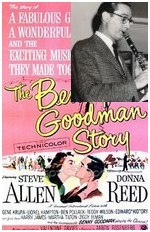 At first I really didn’t know very much about Benny’s life or the ups and downs of his career. Most of my info probably came from the movie The Benny Goodman Story, in which a lugubrious Steve Allen tried to match his fingering of the clarinet keys to Benny’s dubbed playing. (And it was amazing how often he failed.) As a newly-minted swing music fan I just enjoyed the music and probably bought most of the story, without giving too much thought to how accurate it was. I now know that an awful lot of it was typical Hollywood fluff, but it did have some facts too — for example, demonstrating Benny’s steps toward eliminating racial barriers, and also showing how his virtuosity on the clarinet even amazed classical musicians.

As with any famous person, you’ll always find detractors. Benny was thought by some to be a tyrannical perfectionist, but I doubt that careless, lenient bandleaders would have been as successful. He was also rumored to be so tight he squeaked, and in fact he was frugal — but remember his beginnings as the son of poor Russian Jewish immigrants. On the other hand, here’s a little known fact — he quietly funded many worthy causes.

And finally, one more negative to report — he’s devalued by some jazz purists who acknowledge his talent but feel that he wasn’t enough of an innovator, and that his big band was too commercial. To which I say, kiss my royal patooty — I happen to like the sound of his big band.

However, I’m posting a couple of tunes from one of his smaller groups, the Benny Goodman Sextet, which thrived for a number of years featuring Benny with various sidemen on piano, vibes, drums, bass and guitar. First is “After You’ve Gone”, where Benny is joined by Red Norvo on vibes and Teddy Wilson on piano. That’s followed by a classic: “Ain’t Misbehavin”, with the same group except Mel Powell on piano. Both songs illustrate Benny’s talent and are a great listen.

If you want to know more about Benny, here’s the Wiki link, because doing a biography is not my purpose here. Rather I’d just like to salute his long and magical career as the King Of Swing – over 60 years – and as my virtual twin.

One thought on “Was Benny Goodman A Doppelganger?”