The other day I stumbled across a website that features old vinyl records, and it made me feel a little wistful about my departed collection…sort of how you’d feel about a long-gone

but scruffy old hound dog, ticks and all. I got rid of my mutt – er, records – years ago and replaced most of them with CDs, which I guess might seem a little hypocritical for someone who writes about retro stuff, but then I don’t drive a horse and buggy or use a wall phone with a crank, so I guess there is a limit to my nostalgic sensibility.

I began seriously collecting records when I was a teenager and eventually accumulated quite a few, but unfortunately I didn’t heed my friend Louie’s example, so over time my records became pretty worn and ugly. (Louie – my mentor in all things musical – only handled his records by the edges, and

after playing each would wipe it with a special cloth before carefully placing it back into the inner liner of the record cover. He probably still has all his records, wherever he is, and they’re probably still perfect.)

As my records deteriorated and CDs came down in price, I resisted for a while but finally bought a CD player and began to gradually replace the old vinyl platters. I eventually sold them all in a garage sale and they could be anywhere by now, including a landfill. I sometimes wish I had them back, but I guess in a broader sense that urge in all of us is exactly what forms the basis for the booming market in “collectibles”. (And has also made a lot of money for Ebay.)

During the process of replacement I was usually able to get exactly the same album, but not always. One that I couldn’t find featured the orchestra of Les Brown. (You know…Les Brown, the guy with the “band of renown”? Bet you haven’t heard that for a while.) Brown was probably the one most responsible for getting Doris Day off to a good start in her career, but wasn’t considered one of the mega-star bandleaders. He was always a solid success though, and his longevity was enviable. Starting in 1935, he was active for over sixty years. In his later career 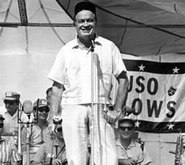 he was probably best known as Bob Hope’s favorite bandleader, performing with many of his shows and accompanying him on USO tours.

I couldn’t seem to find that specific Les Brown album anywhere, but eventually ran across a different one that had most of his best songs. For samples, I’m posting two songs from that album – The Les Brown Story – that weren’t necessarily big hits for the 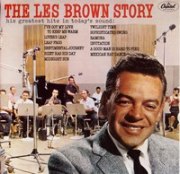 band, but both are very well done. The first should sound familiar to you but you might not know it’s name. It’s called “Midnight Sun”.

I’m including the second tune because I enjoy the way it illustrates something that the big bands often did, which is to record updated swing versions of very old music. In this case, we’ll be listening to a boppin’ version of the traditional song, “Mexican Hat Dance”, (and at the same time saying adios to vinyl records.)