For those who like all kinds of music, let me say that we will eventually get around to lots of different genres and won’t lean too heavily on Big Band, but it is one of my favorite kinds of music and coupling that with the fact that someone wrote in and asked for Benny Goodman, I thought I’d feature…Artie Shaw.

Nothing against Benny – in fact, I’m a big fan and we’ll get to him eventually – but I thought we’d first go with a contemporary of his…a clarinetist equally as famous in his time, and someone who’s private life rivaled that of today’s rock stars.Bandleaders were the superstars of their day, but some more than others. (It’s hard to imagine a bobbysoxer going crazy over Claude Thornhill.) They were idolized, featured in magazines and movies, and made a lot of money with touring and selling records…and some of them married beautiful movie stars, another similarity with today’s big names. One celebrated couple was Harry James and Betty Grable. Another was Phil Harris and Alice Faye. 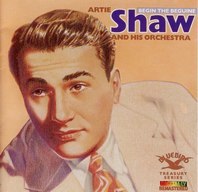 Artie Shaw was one of the biggest stars, and his private life often became very public as he was linked with a lot of beautiful ladies and even married some of them, for example Lana Turner and Ava Gardner. (He was married eight times, and had countless flings.) A professional musician from the age of 15, he was good-looking, talented, charismatic…but irascible, temperamental and dismissive of his fans, which is also like some of today’s stars.

Actually, I always liked Benny Goodman better than Shaw…but that’s for a later posting, so let’s stay on subject here. We’re again featuring tunes from one of the Bluebird library of classic Big Band music, but we’re skipping over the title tune – Begin The Beguine, which was Shaw’s biggest hit – in favor of two others. First is his theme song, Nightmare…followed by Back Back Shuffle. Both were recorded in 1938.