Sometimes I chuckle at all the news coverage about self-driving cars, because I remember a few occasions when my own chariot drove itself. That would be during a period well over a decade ago when I was suffering the effects of 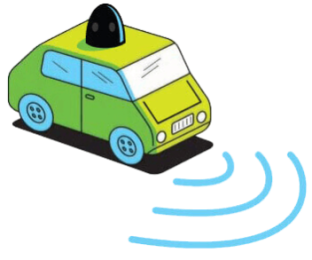 sleep apnea. The problem is that my self-driving car didn’t do a very good job of it, because I’d wake up to find it veering out of my lane. Luckily it always happened on long, lonely stretches of four-lane highway, so I didn’t have any near-misses, but it was still scary enough to get me into the doctor and get my apnea treated.

So I’m fine now and that brings me to part two of today’s post. I still have the same car I was driving then and boyhowdy is it getting old. And so a question has arisen. I have a feeling that it’s pretty common for geezers to hang on to their autos deeply into their twilight years, but how do you know when it’s finally time to get a newer one?

It was in the fall of 1997 that I purchased a brand-spanking-new 1998 Pontiac Gran Prix GT Coupe, and it was everything I could have wanted. I took the time to find one with accessories I needed — like a state of the art (for 1997) stereo system — and I even found an unusual color that I liked; a rich deep purple. Although I’d always been one of those guys who get itchy and trade for a new car every few years, this was the probably the best choice I’d made in all my years of doing that, and I was tickled pink; er, purple.

It was almost as if I knew it might be the last new car I’d ever buy, though I don’t recall thinking that at the time. After all, I was still working then and had no idea that an involuntary early retirement would be heading my way in the not so far future. I just knew that I really liked that car.

So it’s now twenty-one years later and I’m still driving my precious purple Pontiac. I didn’t set out to keep it that long, but after I retired I soon realized that I was putting a lot fewer miles on it and there just wasn’t any real need to get a newer one. But I didn’t expect it to last this long! The doggone thing just keep cruising along and doing fine. It’s never had a major repair, just an occasional smaller fix, and of course normal maintenance, like tires and batteries. I have a mechanic look it over periodically to see if any big problems seem to be on the horizon but so far so good. It’s odometer is at 108,000 miles which seems like a lot, but most of those miles were from the early years, and now I only drive a few thousand miles a year.

So I’m of a mind to just keep driving it until something big and expensive breaks, and then get a newer one. That’s probably the smart move. On the other hand, nobody has ever accused me of being smart so I might just decide one of these days that I’d like to try one of those new-fangled modern cars, the kind with GPS, satellite radio, Bluetooth, back-up camera, and all the other cool things. Don’t forget, I’ve always been a gadget guy.