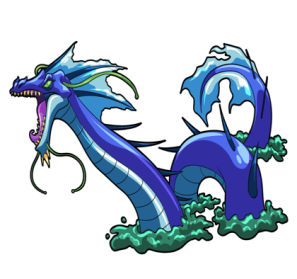 they began their voyages. Everything from giant squids to sea serpents might be waiting for them, and if they avoided those then King Neptune himself might be lurking below the surface and ready to pull them under. Scary stuff but none of it was real, unlike the sea creatures we’re faced with in modern times. There are known to be five of these monsters. . .and they’re all growing bigger every day.

It seems that floating islands of trash have taken up residence in oceans around the world, and they’re enormous. And when I say enormous I mean massive. They’re formed when prevailing winds and ocean currents swirl and funnel the detritus of the human race into one area. The biggest of them — the mass that’s known as the Great Pacific Garbage Patch — is located in the ocean west of California and is estimated to be 600,000

square miles in area. That’s twice the size of Texas. It’s a huge problem for the environment, and there are at least four more of them around the world.

Made up mostly of plastic trash that has accumulated through the years, the patch is not a solid mass. It includes about 1.8 trillion pieces and weighs 88,000 tons. And even though there are plenty of visible pieces of every size, one of the unseen dangers is that some of the material is gradually degrading into tiny particles that mimic plankton, but without the nutritional value. Plankton supports the entire cycle of life in the oceans so this is a critical point.

So what can we do about it? The video above (you did watch it, right?) gave some tips for going forward, but seems to say there isn’t much we can do about clearing up the big masses themselves. (And no, we can’t just nuke them.) But as it turns out, there are people working on the problem. It will take time and money, but several organizations are going forward with plans. One of them is the Ocean Cleanup Foundation, if you’d like to take a look at their website.

Like most worthy causes, the whole thing has caused songwriters and singers to get busy and do their thing.

Of course, you will sometimes find those among us who actually like trash, or rubbish, or garbage; whatever it’s called in your neighborhood.