Radio City, the short-lived pirate radio station that operated off the coast of England for a while in the 60’s, was mentioned recently in a post titled Tony Newman And The Crazy 60’s Music Scene, but if you want to know more about it we probably should start with some history. Pirate radio has been around almost as long as radio itself, dating back to the turn of the 20th century, when the U.S. Navy began to

complain about hobbyists and their ‘bootleg’ rigs interfering with its weather broadcasts. As the years passed and radio became more widespread everyone realized that regulation was called for, and by the time commercial radio — complete with advertising — took hold, the rules had tightened. Licenses were issued with call signs and standards set in place for location, frequency, power, and even programming. If you couldn’t get a license you either went into a different business. . .or you opened an unlicensed ‘pirate’ station.

As the popularity of radio grew through the years many of these stations were built, some with powerful transmitters and locations across borders or on boats anchored in international waters. The latter became the favored method for entrepreneurs in Great Britain, who faced the same dilemma but with an added catch. The British government didn’t just regulate radio, it operated everything itself via the BBC. But that was less than ideal for a number of reasons, and by the early 60’s things began coming apart. Within a short while there were almost a dozen pirate stations operating off the British coastline, thumbing their noses at the BBC by programming hours of the latest pop music (which the BBC barely recognized) and other types of problematic content. And of course, it wasn’t just about the music — they were also less likely to be diligent about paying royalties on the music they played.

Radio Caroline (which is still around but in a much different form) was the first and probably best known, but Radio City followed soon after and might have been the craziest. After all, it was started by a guy named Screaming Lord Sutch, who founded it with his manager, Reginald Calvert in 1964. Sutch, whose real name was David Edward Sutch, was an outlandish British rocker who predated Kiss and Alice Cooper. He would later form his own political party and run unsuccessfully for parliament more than forty times, but at this point he was in the early stages of his career.

Their pirate station began life as Radio Sutch (big surprise) but became Radio City after the ever-restless Sutch sold his share to Calvert. And rather than broadcasting from an anchored ship it utilized an abandoned WWII Maunsell Fort, an odd-looking grouping of structures resembling a bevy of oil platforms. Located far offshore and originally used as spotting stations and the first line of defense against the Luftwaffe, they are now mostly gone but at that time there were several clusters of the ungainly things still around. 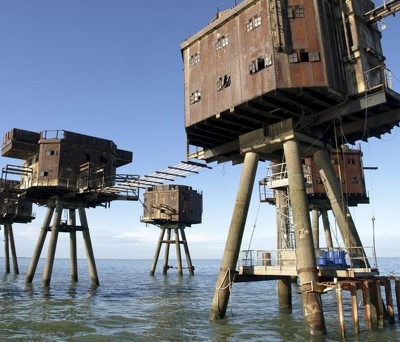 Radio City did pretty well for a while. They programmed the latest pop music and also took advantage of the lack of censorship to offer novelties like Mandy Rice-Davies (the showgirl caught in a famous political scandal) reading Lady Chatterley’s Lover.

In 1967 the British government passed laws that severely restricted the pirate stations by the simple mandate of outlawing their ability to employ British citizens. Radio City and most of the others soon began to drop out, and the era of Pirate Radio inevitably drew to a close. Not coincidentally, the government began loosening up on the programming of the BBC, while also changing its structure and adding outlets. A little later it would even begin to license commercial stations, so if there are any ex-pirates around maybe they can take some comfort from knowing that they made the BBC blink.

2 thoughts on “Screaming Lord Sutch And The Radio City Pirates”