Apparently there’s a movement afoot to try to convince Apple to dumb down its iPhones, or at least make them less addictive, but how they would do that baffles me. Meanwhile Samsung has developed an app for their smartphone called Thrive that promises to try to wean you away from being constantly captive to your phone. I think it sends an electric jolt through your fingers if you try to use it too often. Just kidding (I think) but all of this leads me to one conclusion: it doesn’t surprise me that people are trying to discourage the use of something that I just recently got for myself. Figures.

Once or twice in the past I’ve referred to myself as ‘Inspector Gadget’ — you know, the cartoon character that was later spun off into a mediocre movie? Not because I’m always running around solving crimes while using my high-tech appendages, but because I’ve always been fascinated by gizmos and gadgets of all kinds. (Just for the record, all of my appendages are low-tech or worse.)

So since I’m an acknowledged gizmo guy, it might surprise you to hear that I didn’t even get my first smartphone until a few months ago. It just never seemed to make a lot of sense for me, even though I’ve had a cellphone for years, and consider myself pretty tech friendly. It just always seemed as if my old flip-phone was fine for the occasional call, and if I wanted to play with apps or take photos or videos, I could use a tablet.

But then nature intervened. For about the umpteenth time we had a storm and a power outage, and this time it lasted for a couple of days. This seems to be happening a lot more than it used to, but maybe it’s just that we’re more dependent on it than we once were. Whatever the case, being without electricity for long periods of time is not much fun, and I understand that many parts of the world lack what we take for granted, but it still bugs me. 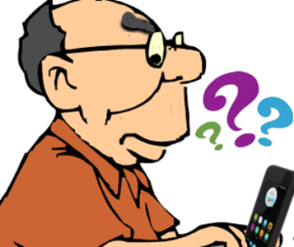 During these power outages we manage to survive the inconveniences in various ways, but there are things that aren’t so easily covered, mostly having to do with the isolation. No wi-fi means no way to keep up on the latest news, and with all the nuclear buttons around I’d like to have some advance warning of the apocalypse. Also, no weather reports, no checking the power company’s website for updates, and no way to check sports scores. (Okay, that last one is minor but as long as I’m complaining I might as well include it.) I’m sure that I’m forgetting a few more but my point is that they are all things that can be done on a smartphone, so I finally decided it was time to take the plunge.

Our cellular company offers all kinds of simple geezer-friendly phones but they also sell smartphones, everything from the latest iPhones to off-brands. They had some pretty good prices on the latter, so Mrs. BG and I now have smartphones. I’m happy to report everything is working just fine and I’m now able to do all the things I wanted, plus the gizmo side of me is having fun exploring new uses, like a medication reminder app. I’ve also found myself texting with my kids and grandkids, and have even traded texts with an old buddy who lives in another part of the country. Of course, I fumble a little with the tiny keyboard but there are ways around that. For one thing, the autocomplete almost seems to read my mind, making word suggestions that are uncanny. I guess this is that AI thing they’re always talking about. Or maybe the phone’s just smarter than me.

5 thoughts on “My Smartphone Might Be Smarter Than Me”