Way back in 2007 I put together a post titled The Quintessential Italian Crooner, in which I wrote about some of the better-known Italian/American smoothies. But even though I didn’t intend that post to be all-inclusive and have written about quite a few more since then, it’s still surprising how many others remain. One who would qualify is Frankie Randall, a New Jersey native who was born as Franklin Joseph Lisbona, and he owed a lot of his success to a guy named Sinatra. 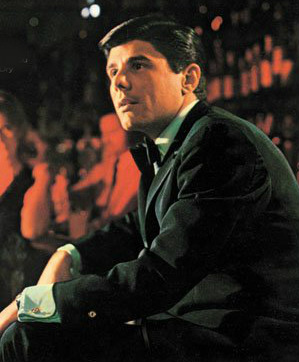 Randall actually began his musical life by studying classical piano, but as a teenager he turned his attention to jazz, eventually earning a music scholarship to college. By the early 1960s he’d finished school and was ready to try for a career, and it began to take shape when he snagged a job entertaining at Jilly’s in New York.

The nightclub’s owner, Jilly Rizzo, was an old buddy of Frank Sinatra’s, and Ol’ Blue Eyes spent a lot of time there whenever he was in New York. He soon caught the new kid’s act, and decided to give him a boost by helping him work a deal with RCA Records. It wasn’t long before Randall was generating his first album and soon thereafter enjoying a rise in popularity. His success continued with a second album and in 1965 he was cast as the lead in an otherwise forgettable teen movie (video below).

For the rest of the 1960s and into the 1970s Randall continued to generate records but he also made a lot of TV appearances; not just guest shots, but also as a regular (and fill-in host) on Dean Martin’s show. He also found time to do a few international music tours before eventually settling down in the 1980s as the musical director of an Atlantic City casino. But he wasn’t quite finished with performing, returning to the spotlight in the 1990s and eventually creating a special stage show titled Tribute To Sinatra, helped by his old friend’s gift of his arrangements shortly before his death in 1998. Randall continued to work off and on in his later years, and was 76 when he died in 2014.