Exactly six years ago today we spotlighted J.P. Richardson, better known as the Big Bopper, a DJ and songwriter-turned performer who had the misfortune to go down in the same 1959 plane crash that took the life of Buddy Holly. But just before that, he was instrumental in getting another rock and roller off to a good start, even if he wasn’t around to enjoy it when Johnny Preston took “Running Bear” to the top of the charts. 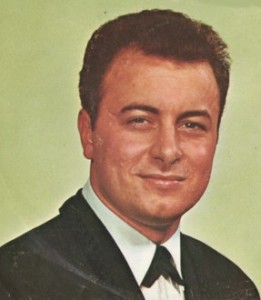 John Preston Courville was born and raised near the Louisiana border in Port Arthur, Texas, and as someone who was part Cajun it’s not surprising that he was musically inclined. But even though he sang choir in high school, it wasn’t until he was in college in the late 1950s that he found himself in a breakout moment for his musical career. While going to school in Beaumont he’d formed a small band that entertained in area night clubs, and during one of his appearances he was spotted by Richardson, who was looking for someone to record a song he’d written.

The song — “Running Bear” — was a silly take on the old tale of Romeo and Juliet, but with American Indian characters. Richardson arranged for a studio and backup musicians and singers, including himself, veteran Link Davis, and young George Jones, who was even then beginning to build his fame as a country star. Richardson and Preston then took the recording to Mercury Records, and it was issued just about the time Richardson had his fatal plane crash, so he wasn’t around to see it shoot up the charts to #1.

It would be Preston’s biggest hit by far, although he did reach the Top Ten with “Cradle Of Love” and had several other lower charting records before things started slowing down for him. He was relatively inactive for a number of years, but like many others of his era, found some late career success on the oldies circuit and in Branson. He was 71 when he died in 2011.