Even those of us who were not around in the 1930s still remember seeing (or at least reading about) old movies featuring the famous singing duo of Nelson Eddy and Jeanette MacDonald. They were super-stars in their era, teaming up in countless musical films and operettas that sold a lot of tickets. In fact, they were so valuable that MGM had replacements lined up for them, so the story goes. But even though Douglas McPhail and Betty Jaynes had a measure of success as themselves, they never got a chance to replace the big-name stars. 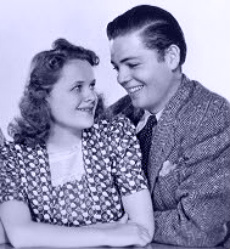 McPhail was a Los Angeles native whose strong baritone voice helped him gain notice while he was still in his teens, and he began finding small spots in mid-1930s musicals. Before long he was under contract to MGM and showing up in featured parts, but with the understanding that he was the back-up for Nelson Eddy. Eventually he teamed up professionally — and romantically — with Betty Jaynes (a teenager from Tennessee whose real name was Betty Jayne Schultz).

Of course, the newly-married couple never actually fulfilled their alternate destiny, but they did have several good years of performing, showing up either separately or together in several Hollywood musicals. (Below is a video excerpt from one of them, 1939’s Babes In Arms, which starred Judy Garland and Mickey Rooney. McPhail is the lead singer, but Betty is right there with the others. The same movie was the source of one of their best duets —  “Where Or When” — which also features a late refrain by Judy Garland.)

Unfortunately things began to go downhill, both career-wise and personally. The couple divorced in 1941 and McPhail grew very depressed from his lack of roles, with the added burden of his heavy drinking. After an earlier suicide attempt failed, he poisoned himself and died in 1944, only thirty years old. Betty pretty much disappeared into private life, and would be in her nineties now.