Although hers is not a familiar name to most of us now, Gertrude Niesen was a solid success for a couple of decades beginning in the 1930s. A multi-talented performer, she was a singer and comedic actress who was equally at home on the bandstand, on Broadway, or in Hollywood films. She also co-wrote some songs and even found her way onto early TV in the latter stages of her career. 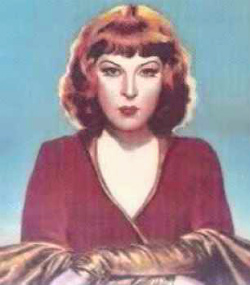 A native of New York City, Gertrude Niesen first began to attract some notice in the early 1930s, appearing in an early ‘soundie’ backed by Artie Shaw’s band. She also began making records, among them the debut recording of what would be a classic, “Smoke Gets in Your Eyes.” In addition she found work in Broadway musicals, where she soon rose to featured roles.

Her strong singing voice and sassy comedic style became a favorite of many, and before long she began showing up in Hollywood musicals like Top of the Town, in which she sang “Where Are You,” a song written especially for her. And even though she was never a major film star, she did reach featured status in several movies produced during the 1940s.

Her biggest success came when she returned to Broadway during World War II and starred opposite Jackie Gleason in the musical Follow the Girls. Her role as a burlesque queen included her show-stopping solo on “I Wanna Get Married,” a song that became her signature tune. She would later appear on stage in a production of Gentlemen Prefer Blondes on the West Coast, and often found guest spots on early TV, but her career started to wind down in the early 1950s. Although she continued to make a few records from time to time, she was pretty much out of the business within a few years. She was 63 when she died in 1975.