At the beginning of her career Rosalie Allen performed as a singing and yodeling cowgirl, a style inspired by earlier stars like Patsy Montana. In fact, her first hit record in 1946 was an update of Patsy’s iconic “I Want to Be a Cowboy’s Sweetheart.” But before she eventually retired to raise her family she also found success as part of a singing duo, became a Hall of Fame DJ, spent some time as a producer and promoter, hosted a TV show, and even founded the first country music record store. 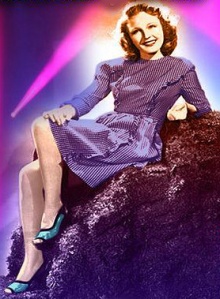 Unlike many country music stars, Rosalie Allen (whose real name was Julie Marlene Bedra) was from the East, specifically the borough of Old Forge in Eastern Pennsylvania. She was a part of a large Polish-American family, but while growing up she often listened to country music on the radio, and taught herself to sing and play guitar. She was still in her teens when she first began appearing on local radio, and within a couple of years had moved to New York to try for stardom.

By now calling herself Rosalie Allen, the young singer must have been dazzled by the pace of wartime New York City, but she soon began to find work in the flourishing country music scene. Among her activities was working for country music star Zeke Manners, who was already the toast of town, and she also got acquainted with Elton Britt, who was selling a ton of records at the time (and would later join her as part of a popular singing duo). Eventually Rosalie was able to get into the recording studio as a soloist, and her effort on “I Want to Be a Cowboy’s Sweetheart” became her first hit. But as it turned out, the ‘B’ side of the record — “Guitar Polka (Old Monterey)” — ended up becoming even more popular. In any case, it was the beginning of some real successes for the performer, who not only continued to entertain but also work behind the scenes as a promoter and producer.

As the years passed, Rosalie seemed to be everywhere. She was part of Carnegie Hall’s first country music concert, and she also hosted a radio show, wrote music articles, and founded America’s first country music record store, the Rosalie Allen Hillbilly Music Center. She also joined with Britt in a series of duets, cutting Top Ten hits like “Beyond the Sunset” and “Quicksilver.” She even hosted her own TV show for a while, but the pace eventually slowed and Rosalie was ready by then to retire from performing, although she kept an interest in the business for many years.. She was 79 when she died in 2003.