I was sorry to read of the recent passing of singer/actress Polly Bergen, who died at age 84 of complications from emphysema. As has been our custom, I’m reposting our original feature on the star and also temporarily reactivating the music link.

The Musical Side Of Polly Bergen

I don’t know about you, but even though I knew Polly Bergen could sing, I have always thought of her as an actress. In fact, I was doing just that — thinking about her — not too long ago when I read a story about the odds of Hillary Clinton becoming president, because one of Bergen’s memorable roles was in 1964’s Kisses for My President. In case you’ve forgotten, she played the president and Fred MacMurray was the – er – first husband or first gentleman, whatever. But she’s always had a musical side too, and that’s what the GMC is all about. 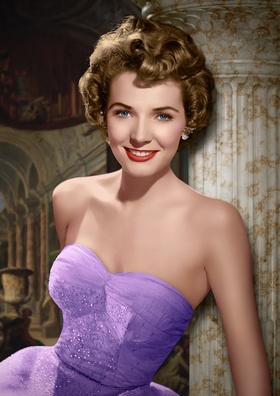 A native of Knoxville, Tennessee, Nellie Paulina Burgin was raised in a musical family — her father was a talented amateur singer who would appear on her TV show many years later — but even though she always sang, her career leaned more toward acting in the early years. While still a teenager she began building her experience in radio and on stage, and by the late 1940s was ready to try her luck in Hollywood.

It didn’t take long for her to begin showing up in small parts in movies and gradually moving on to bigger and better roles, but film stardom eluded her and by the early 1950s she was using her singing ability to expand her career, showing up on Broadway and occasionally on TV. It was about then that throat surgery slowed her down a little, but in the mid-1950s she really began to gain some momentum as a singer, recording several albums and making high-profile appearances like her Emmy-winning portrayal of singer Helen Morgan on TV’s Playhouse 90.

By the 1960s she was still singing but also getting co-starring roles in movies, occasionally appearing on Broadway, and frequently showing up on TV. In subsequent years she continued to take choice parts, like her Emmy-winning role in TV miniseries The Winds of War (and its sequel), but she later revealed new talents by founding her own company to market cosmetics, jewelry, and shoes. She also wrote several beauty books, and even now — in her eighties — is still active.