For today’s edition of Country Catalyst, the Special Feature that spotlights a classic song in the hope that it might bring more folks to country music, we have a tune that was a huge hit for two different singers, decades apart. And to add to the mix, the song’s composer — who had the first hit — didn’t do it until he’d talked his record company into reissuing his record five years after he first made it. 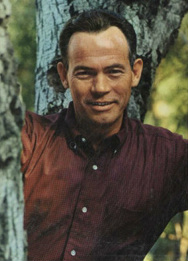 Singer/songwriter Ned Miller was in the early stages of his long career when he wrote and recorded “From a Jack to a King” in 1957, but he was already finding some success as a songwriter. It was that skill that would produce hits like Gale Storm‘s “Dark Moon” and Jimmy C. Newman’s “A Falling Star,” and Miller would eventually have some solid records of his own too, but his early efforts were disappointing in terms of sales.

It didn’t help that he often suffered from stage fright and found it difficult to do the live shows that helped promote a performer’s records. Still, he believed in “From a Jack to a King” and talked his record company into reissuing the single in 1962. For whatever reason, it hit the target with music fans this time around and shot up the charts, becoming his first (and biggest) hit record. He followed with a number of good-sellers, but as his career progressed he found continuing success mostly as a songwriter.

Meanwhile, “From a Jack to a King” proved to have a long life, and was recorded by everyone from Elvis to Jerry Lee Lewis. But the biggest hit of all occurred when country star Ricky Van Shelton, who’d already enjoyed several #1 records by then, recorded his version of the song and it shot to the top of country charts in early 1989.

2 thoughts on “Country Catalyst – It’s In The Cards ”