Here’s something you might not know. Like many actors, western star Clint Walker (who is still around, and in his eighties) occasionally tried his hand at singing. And even though it wasn’t a big part of his career, he did demonstrate a pleasing baritone while vocalizing in various TV and movie appearances, and he also generated at least one solid album. 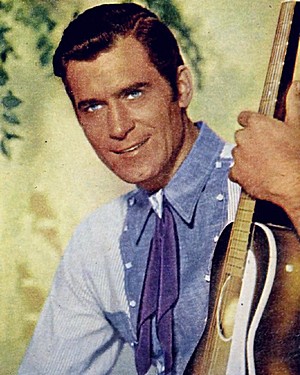 If ever someone looked the part of a Western star it was Norman Eugene Walker, who was born near St. Louis in the Mississippi River town of Hartford, Illinois. Six feet, six inches tall, with rugged good looks and impossibly wide shoulders, he cut a heroic figure. But he started his working life in a pretty humble way, leaving school at age 16 and working at various blue-collar jobs before joining the Merchant Marines in the latter stages of World War II.

In the post-war years he gradually worked his way West and by the 1950s found a job as a deputy sheriff in Las Vegas, which was then beginning to attract the Hollywood crowd in a big way. It wasn’t long before Walker was getting to know some of the players, and he soon came to the attention of legendary producer Cecil B. DeMille. After getting a start in a couple of small movie parts Walker was in the right spot at the right time to get selected for the title role in a new TV show, Cheyenne.

Debuting in 1955, Cheyenne was one of the earliest TV westerns and was the first full-hour one. It is also still considered one of the best, and during its eight years of life it enabled Clint Walker to become a popular star. He would continue to enjoy a long acting career for many more years, but let’s get back to the musical side of things. Walker burst into song a number of times during his TV shows and movies (you can find them on youtube), so the desire was there. But it appears that his main success in the recording studio occurred when he generated an album of mostly inspirational songs. It’s still available now, and I’m sure it’s a hit with his many fans.

22 thoughts on “The Singing Side Of Clint Walker”