I would imagine that most regular visitors to the GMC, when reading a headline about a 1960s group called the Four Seasons, would immediately think of Frankie Valli and his Jersey boys. But there was another group around in those days that called itself the Four Seasons, at least for a while. In spite of the name it was a trio, and after later becoming the Sandpipers it enjoyed a burst of popularity that peaked with “Guantanamera” in 1966. 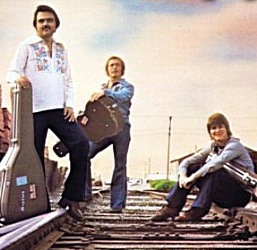 California buddies Mike Piano, Jim Brady, and Richard Shoff didn’t know about the East Coast group when they first formed their own Four Seasons in the mid-1960s, but they soon found out and subsequently became the Grads. They managed to make a few records using that name, but even after becoming the Sandpipers and landing a new recording contract with Herb Alpert’s A&M Records, the trio’s record sales were still underwhelming.

That ended when their record producer helped line them up with an old Latin song that had been recorded a few years earlier by folk-singer Pete Seeger. Using Seeger’s adaptation, the Sandpipers cut a record of “Guantanamera” and scored a smash hit on both U.S. and British charts. That success allowed the Sandpipers to build a little momentum and the trio followed with several other good-sellers, although none to rival the popularity of that one big record.

Still, the group continued to perform in the same style, which sort of combined folk music with easy listening and often included a chorus and strings. For a while the guys also made room for an uncredited female vocalist, whose spooky vocals added an additional instrument of sorts to the mix. But after a brief resurgence in 1970 with “Come Saturday Morning” (the Oscar-nominated song from The Sterile Cuckoo), the Sandpipers seemed to fade. Within a few years they’d disbanded.