It’s been almost two months since our last Fantastic Foursome, so for newer visitors I’ll explain that it’s a special feature that presents four different versions of a familiar song (actually five if you count the video) and then offers you the chance to vote for your favorite. Of course, voting is optional but it’s pretty quick and easy to do, and it’s completely anonymous. 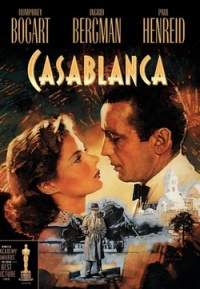 Today’s offering is a song that made its biggest splash when it was featured in Casablanca, the 1942 movie that has been picked by many as the best of all time. But “As Time Goes By” was actually written for a Broadway musical a decade earlier and was recorded by several performers in the intervening years, including early crooner Rudy Vallée.

The song was composer Herman Hupfeld’s best-known by far, but the version made famous in Casablanca was not actually the full, original song. When Dooley Wilson sang it in the film he actually started at the chorus, rather than at the true beginning. In subsequent years most singers went with that version because it was familiar, but there were still some who sang the full song. Below you’ll find two of each variation, along with a video. You can vote for your favorite below that.