A couple of weeks ago we featured ‘Handsome’ Harry Babbitt, the crooner who had a big part in popularizing Woody Woodpecker’s theme song. Today it’s Mighty Mouse’s turn in the spotlight, but we don’t have a personable singer to perform for us. Instead we have a strange and eccentric comedian. 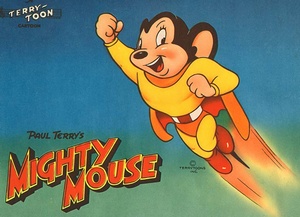 In any case, Mighty Mouse has continued to be a favorite of kids in all the many years since, but he did get renewed interest in the mid-1970s when the oddly compelling comedian Andy Kaufman made the super-rodent’s theme song part of his act. It’s difficult to see why people laughed when you watch it now (video below) but it was one of the strange entertainer’s most popular appearances, and it helped make him a star.