I thought I’d try something different today. It might be unappealing to those who aren’t fond of videos (or don’t have the fast internet connection they require) but the endless number of videos that are now available help make something like today’s post possible. It’s a look at Eddie Hodges, who has led an amazingly varied life; one that has included appearing on Broadway, showing up on a TV quiz show alongside a future astronaut (and senator), a movie duet with Sinatra, record stardom, and eventually a completely different career as a non-performer. 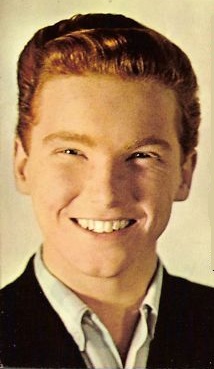 It might seem strange to see a six-year-old from small-town Mississippi breaking into show business, but shortly after his family moved to New York in 1952 that’s just what happened. The charismatic young performer began showing up on TV guest spots with guys like Jackie Gleason, and also made quite an impression with his first appearance on Name That Tune in 1953. (He would appear again a few years later with the then relatively-unknown John Glenn. Hodges continued to make TV appearances for the next couple of years before breaking out in a big way in The Music Man on Broadway, his casting said to be the result of composer Meredith Willson seeing him on Name That Tune.

The sky was the limit for the young star. He seemed to be everywhere for a while, most notably singing “High Hopes” alongside Frank Sinatra in the 1959 film, A Hole In The Head. But he also made other movies ( – oops, see comments below) and continued to show up on TV pretty regularly too. By the time he was in his early teens he’d taken another step, becoming a genuine teen singing idol, with “I’m Gonna Knock On Your Door” and “Girls Girls Girls (Made To Love)” among his many hits.

Hodges continued to work as he grew to adulthood, but then went through some changes in his life. He was drafted during the Vietnam conflict, and after fulfilling his military obligation he returned to show business but was no longer happy in the life. He moved back to Mississippi and went to college, eventually becoming a mental health counselor. In his later years he was briefly in the news in 2005 for riding out Hurricane Katrina, and he continues to entertain fans from time to time but is mostly retired.

11 thoughts on “The Many Lives Of Eddie Hodges”