One of my favorite movies has been on TV a lot lately, and it’s the basis for today’s Anatomy Of A Song feature. The film — O Brother, Where Art Thou? — starred George Clooney and was broadly based on Homer’s Odyssey (in fact, Clooney’s character was named Everett Ulysses McGill) but took place in Depression-era Mississippi and was given a decidedly comic twist. 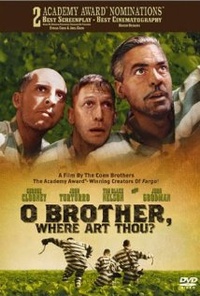 I always felt that the film didn’t get the kind of praise it deserved, but one thing that it did accomplish was help fuel a reborn popularity for old-style country music. The movie’s Grammy-winning soundtrack was loaded with good tunes, and the biggest hit of all was the one that featured Clooney (dubbed by Dan Tyminski) and the fictional Soggy Bottom Boys singing “Man Of Constant Sorrow.” It was also featured in a video that was constantly on TV for a time, and it won both a Grammy and a CMA Single of the Year award.

But even though the song was new to most music fans at that time (including me) it has actually been around for a least a century and maybe a lot longer. It first shows up with the title “Farewell Song” on a 1913 record by a blind Kentucky musician named Dick Burnett — who might or might not have written it. (Another story is that it originated in Ireland.) In any case, as the years passed the song began showing up in the performances of other early entertainers, gradually evolving to its current title and lyrics.

Other than the movie, the song is probably most closely identified with the legendary Ralph Stanley, who even titled his autobiography Man Of Constant Sorrow. He’s been singing it throughout his life (he’s now 86) and remembers hearing it as a child, but says it could be much older. His mournful rendition is evocative of the song’s message of pain and suffering.