It’s often difficult to pin down key moments in the early days of rock and roll, but one event that seems a likely candidate occurred in 1954 when a jive band led by a set of identical twins appeared on TV’s Colgate Comedy Hour, hosted by Dean Martin and Jerry Lewis. Most experts feel that when that group — the Treniers — brought its act to the tube, it was the first time that rock and roll was shown on national TV. 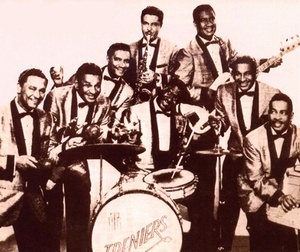 Cliff and Claude Trenier had by that point already logged a lot of years in a career that began during the swing era, when they sang in Jimmie Lunceford’s band. By the early 1950s they’d started to transform their style of hot blues into something else, adding brothers Milt and Buddy to the mix along with some instrumental sidemen, including a honkin’ sax player.

It sure sounded a lot like what we would come to know as rock and roll, and the titles of a lot of the songs fit the mold too. Some of the Treniers’ best selling records included “Good Rockin’ Tonight,” “Rock-A-Way,” “Rock-A-Beatin’ Boogie,” and “Rock And Roll Call.”

But even though the Treniers found spots in a couple of musical movies and made a lot of records, including a minor hit with a 1955 novelty song — “Say Hey” — that featured a cameo by Willy Mays, the group eventually faded from view. Not much information is available about the later years of the original Trenier twins, but at last report brother Milt is still entertaining fans, and he’s now in his eighties.