One of the many funny scenes in the 1983 film Vacation is when Chevy Chase recklessly drives alongside the blonde in the convertible, almost losing control (in more ways than one), before things calm down and his oblivious wife finally realizes something just happened. He then sings “Love For Sale” to himself, while she glares at him. (Video below.)

Although the song seems tame by today’s standards, when Cole Porter wrote it for Broadway’s The New Yorkers in 1930, it was considered scandalous — and just to drive home the point, it was performed in the show by a character who was a prostitute. But 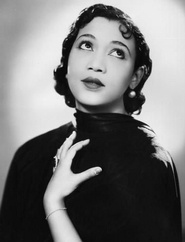 interestingly enough, the protests ceased when some changes were made. The white singer who had performed the song was replaced with a dark-skinned, racially mixed performer named Elisabeth Welch, who sang in front of a replica of the Cotton Club. Apparently that made it acceptable.

Elisabeth Welch was an interesting story too. The New Yorker was the daughter of a white mother and a father who was equal parts African and Native American, and she no doubt had to overcome a lot of obstacles in her rise to success. In fact, when she began to appear on stage in London in the early 1930s, she found European attitudes more to her liking and she ended up relocating permanently. She would have a long career on stage and screen — and a long life too, dying at age 99 in 2003.

In any case, even though all versions of the song were banned from radio play for years, it did very well in record sales. In the early 1930s torch singer Libby Holman hit the Top Ten with her rendition, and Fred Waring and his Pennsylvanians had a hugely successful record too. As the years passed and the song became ‘safer’ a lot of others followed in their footsteps — including eventually Chevy Chase.