Country music fans who have been around a while might recall that things began to change in Nashville along about the late 1960s. In an effort to appeal to a wider audience, a lot of the music that was being produced began to move away from the traditional style and toward something resembling pop music. But it didn’t happen overnight, and a lot of performers managed to work within the system and still keep some of the ‘twang’ in their music. A few of them even managed to top the charts — for example Jeanne Pruett, with her 1973 megahit “Satin Sheets.” 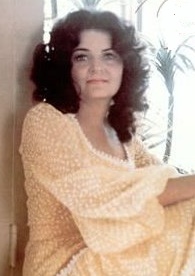 She began life as Norma Jean Bowman, a small-town Alabama girl who married guitarist Jack Pruett and moved to Nashville with him in the mid-1950s. Jack found plenty of work, eventually settling into a regular spot with country star Marty Robbins, while his young wife mostly stayed home with her growing family. But she also began to write some very good songs, and Robbins soon began turning them into successful records.

By the early 1960s she was not only furnishing songs to Robbins and others, she was also beginning to take on the performing side of the business, billing herself as Jeanne Pruett. Although she sold some records, it took a few years before she began to crack the charts with songs like “Hold On to My Unchanging Love” and “Love Me.” It all came together for her in 1973 when “I’m Your Woman” cracked the Top Ten and then “Satin Sheets” shot all the way to the top.

It would be her only chart-topper, but Jeanne Pruett continued to enjoy a lot of success over the next decade, appearing on the Grand Ole Opry and selling a lot of records with songs like “You Don’t Need to Move a Mountain” and “A Poor Man’s Woman” while also spending time with her family. She even got into the Top Ten again with “Back To Back” in 1980, but as the years passed the musical side of things inevitably slowed down, and she began spending more and more time in other activities. Now in her seventies and in retirement, she is still keeping busy with her many interests, including gardening, cooking, and writing.