Country music has always been replete with guys named ‘Tex’, and I’m not even going to begin to try to list them. (But if you’re any kind of fan I bet you’ve already thought of a few). You can also find quite a few performers whose last name was Williams, but as near as I can tell there was only one Tex Williams — and he wasn’t even from Texas. A popular vocalist and bandleader for many years, his talking-blues style of singing was perfect for his biggest hit, “Smoke, Smoke, Smoke That Cigarette,” which was later performed by everybody from Commander Cody to Sammy Davis, Jr. 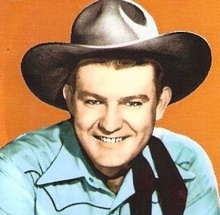 Sollie Paul Williams grew up in rural Illinois during the Great Depression and like many in those days, turned to music as a career. His first brush with stardom occurred in the early 1940s when he became part of Spade Cooley’s Western Swing band as a guitarist and singer. In fact, it was the ill-fated Cooley who gave him the ‘Tex’ moniker as a way of appealing to the high percentage of Texans attending live shows. But Williams didn’t mind. It became his stage name for the next four decades and he embraced it with songs like “I’ve Got Texas In My Soul.”

For several years Williams was a popular soloist with Cooley’s band — so much so that he was able to land his own solo recording contact and also ask for more money from Cooley, but the volatile bandleader fired him. It was probably the best thing he could do for Williams, who took a lot of Cooley’s best musicians with him when he left, and began what would be a long and successful career as a headliner.

It was a little rough at first, though. The musical world was shifting in the years immediately following World War II, and Williams’ band spun its wheels for a while, even venturing into polka music. But when his friend Merle Travis wrote “Smoke, Smoke, Smoke That Cigarette” for him (and shared the credit) it became a huge hit and paved the way for years of success. Although he never again hit that high on the charts, in the decades that followed he made dozens of successful records before his popularity inevitably faded. He died in 1985 at age 68.