I’ve written before about how certain songs seem so familiar that I’m convinced we had the record around the house while I was growing up. A good example would be Perry Como’s “Don’t Let The Stars Get In Your Eyes,” which topped the pop charts in 1952. But even though his version is the one that’s familiar to me, it wasn’t the only hit record of the song that year. Skeets McDonald hit the top of the country charts with his version, and it stayed there for 18 weeks! 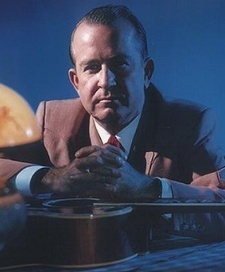 Enos William McDonald grew up in rural Arkansas, where he picked up his mosquito-themed nickname, along with a lifelong interest in music. By the time he’d reached adulthood in the mid-1930s, he’d followed an older brother to Detroit, where he soon began to make appearances with a country music group called the Lonesome Cowboys.

McDonald spent the new few years gaining musical experience, even forming his own group for a while and also appearing on radio, but things changed when World War II came along. Drafted into the Army, he served bravely in combat zones (earning a Bronze Star) and eventually resumed his musical career in Detroit in the post-war years.

By the early 1950s, McDonald had helped out on a few records and even appeared occasionally on TV, and he decided to relocate to California, hoping to take the next step. It turned out to be a good move, because he landed a deal with Capitol Records and subsequently released “Don’t Let the Stars Get in Your Eyes,” which climbed to the top of the charts and stayed for a long time. Although he’d not have another record do so well, it marked the start of what would be his best career years, with records like “This Old Heart” and “Call Me Mr. Brown” doing very well. He also made many appearances on the Grand Ole Opry, and even did the occasional movie spot, but his career came to a premature end when he suffered a fatal heart attack in 1968. He was just 52.