One of the original goals of the GMC was to provide a place for fans of the music of the past to participate — not only by reading about the music and the performers (and listening to it!) but also by taking advantage of the ‘comment’ feature to have lively and informative discussions.

A good example is one of our most popular pieces, Dave ‘Baby’ Cortez And His Happy Organ, which has over two dozen comments. Those include praise from fans, comments from former friends and bandmates, and even several from his daughter, Taryn, whose presence completely revitalized the discussion. Media folks weighed in with interview requests, one thing led to another, and it appears that Dave is now working again. 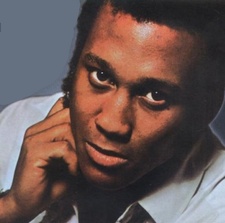 All the credit goes to Dave and his family and friends so don’t think I’m trying to claim any, but it’s obvious that the GMC can sometimes be a kind of catalyst in reconnecting people. Which brings us to the original subject of this post, singer R.B. Greaves, who made a big splash in 1969 with “Take a Letter Maria.”

His story is an interesting one. Born as Ronald Bertram Aloysius Greaves III on an Air Force base in British Guyana during World War II, he grew up on a Seminole reservation but then moved to England as an adult. By the early 1960s he was performing as an R&B singer known as Sonny Childe and was leading a group called the TNT’s, but success was elusive even though he had a famous uncle — Sam Cooke.

Within a few years things changed. A song Greaves had written — “Take a Letter Maria” — had sold a lot of records for Tom Jones and Stevie Wonder, and that helped pave the way for the composer’s own record. It was a huge hit and gave a big lift to his career, but even though follow-up records like “Always Something There to Remind Me” and his rendition of Procol Harum’s “A Whiter Shade of Pale” did reasonably well, things went downhill after that.

Greaves made an attempt at a comeback in the 1970s but has not been much heard from since. There is a little information about him at various websites, but it’s mostly repetitive and seems to have a lot of gaps in his later years. Does anybody know what R.B. Greaves is up to these days?

10 thoughts on “Whatever Happened To R.B. Greaves?”