Although Lawrence Welk has shown up here on the ol’ GMC more than once, his appearances have mostly been in a supporting role, as in When Lawrence Welk Became Cool, a piece about jazz saxophonist Johnny Hodges. I’ve always maintained that during my teen years I pretty much considered Welk and his music hopelessly square, and wouldn’t be caught dead watching his TV show — at least until I began to notice the Lennon Sisters. 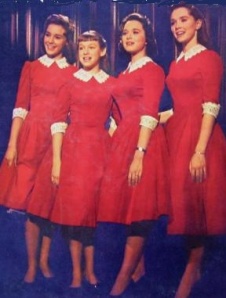 Although the Lennons had been performing on Welk’s TV show since 1955, I don’t think I paid much attention until and I got a little older and — like most teenage boys — my head began to be turned by pretty girls. The Lennon Sisters certainly qualified (especially one who was just about my age) and I soon found myself a lot more interested in watching Welk’s TV show.

Diane, Peggy, Kathy, and Janet Lennon (in descending order by age) were pretty much linked to Welk for most of their big years. Beginning in 1955 when their ages ranged from 9 to 16, the Lennons became a popular part of Welk’s TV family for over a decade while fans of the show watched them grow to adulthood. The girls also joined the orchestra on a number of records, and managed to sustain a solid recording career of their own too. Their biggest sellers were “Tonight You Belong To Me” (which was a huge hit for Prudence and Patience) and a few years later, “Sad Movies Make Me Cry.”

In subsequent years, the sisters performed regularly on other TV programs and even had their own variety show for a while. In the decades since, they’ve continued to perform fairly regularly while juggling marriages and children, often showing up in Vegas and Branson. At times, one or the other of the originals will stay home for a while, either replaced by youngest sister Mimi or turning the quartet into a trio, but their long-time fans can even now find the Lennon Sisters still around.