I saw an article recently about some of the odd things collectors look for, and I was surprised to see that old slide rules are considered a collectible now. It got me wondering what ever happened to the one I had to buy a half-century ago as a condition of attending a prestigious engineering college. 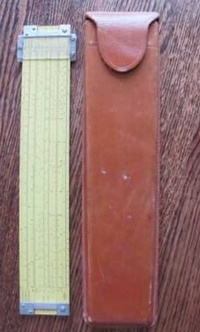 This was years before electronic calculators began appearing and making slide rules superfluous, but there was nothing better at the time. Any engineering student had to buy a good (and expensive) instrument, complete with fitted leather case.

I won’t go into too much detail about my short period at the college, other than to say that I wasn’t ready to buckle down and take advantage of the opportunity I’d been given. But in any case, my slide rule rattled around in closets and boxes for years, and eventually I lost track of it.

Apparently there are still a few people around who use slide rules. And the retro gizmos surprisingly have enough of a ‘cool’ factor for someone to have create the ultimate salute — an iPhone app. (Video below.) But I’ve never figured out what happened to my original slide rule. It just seemed to disappear. Maybe Paul Simon had the right idea when he sang a familiar song.

6 thoughts on “The Mystery Of The Disappearing Slide Rule”