It’s been a while since we featured country music on the ol’ GMC, and even longer since the sub-genre known as bluegrass has made an appearance. That being the case, it seems only fitting to take a look at one of the best of the traditional bluegrass acts, a husband and wife team that also helped usher in a more modern style of country music.

Wilma Lee and Stoney Cooper starred on the Grand Ole Opry for a couple of decades, but their career as a musical duo actually stretched much longer. 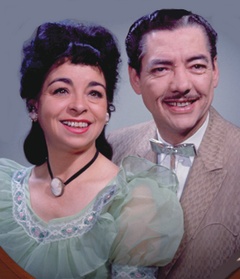 And even after Stoney died in 1977, Wilma continued to perform as a solo for many years.

Wilma and Dale ‘Stoney’ Cooper both grew up in musical families in the same rural West Virgina county, but they weren’t childhood sweethearts. In fact, Stoney was four years older. And they didn’t immediately form a romantic team when Stoney first joined Wilma’s singing group, the Leary Family, in the pre-war years. However, the twosome soon became a performing duo, and before too much longer became husband and wife.

For the next two decades they built their fame via radio, stage shows, and record sales, often backed up by their band, the deliciously named Clinch Mountain Clan. Some of their biggest hits included “Cheated Too,” “Big Midnight Special,” “Big Wheel,” and “Wreck On The Highway.” They also became fan favorites on the Grand Ole Opry and made regular appearances on early country music TV shows. Eventually the couple’s daughter, Carol Lee, would also join the act.

By the late 1960s Stoney’s health was deteriorating, although the couple kept performing as much as possible until his death a decade later. Wilma continued to entertain until her own health problems surfaced — she had a stroke in 2001 while performing at the Grand Ole Opry. Since then she has fought through and now occasionally shows up to say hello to fans.