One of the most respected country music songwriters of all time would have to be Harlan Howard, who composed over 4,000 songs during his long career, many of them classics. But he would have been the first to give credit to DJ turned singer Charlie Walker, who helped give a boost to the songwriter’s early career with his 1958 hit record of Howard’s honky-tonk piece, “Pick Me Up on Your Way Down.” 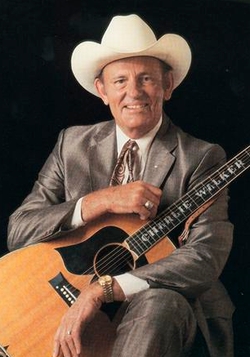 Although he grew up on a Texas cotton farm, Charlie Walker’s family was supportive when he decided to try to break into music as a teenager during the early years of World War II. For a while he did get some experience as a singer and guitarist, but he enlisted in the Army near the end of the war and soon found himself working as a DJ for the occupation forces in Tokyo.

It turned out that he was pretty good at it, and after he returned to civilian life he soon began to build his fame as a San Antonio radio star. He was so popular that years later he would be inducted into the DJ Hall of Fame, but he continued to play and sing on the side and keep an eye open for opportunities to make it as a musical performer.

By the 1950s he was beginning to find some success as a singer, and generated several records that did moderately well, including “Only You, Only You,” which made it into the Top Ten. His biggest seller followed a little later — Howard’s “Pick Me Up on Your Way Down,” which just missed topping the charts — and he would continue to produce popular records for a number of years. Among his better sellers were “I’ll Catch You When You Fall,” “Who Will Buy The Wine,” and a little later, “Wild As a Wildcat.”

In later years, Walker spent some time as a Vegas attraction and also became a long-standing and beloved regular on the Grand Ole Opry. He also managed to find a small part in a movie — Sweet Dreams, the story of Patsy Cline. He stayed active until his death from cancer in 2008, and is still fondly remembered by many.

Charlie Walker – “Who Will Buy The Wine”