After almost a decade since his death, the enigma of Fred Neil continues to puzzle many of his fans. A tremendously respected songwriter and performer who inspired many, including John Sebastian, David Crosby, and Bob Dylan, he is most remembered as the composer of “Everybody’s Talkin’,” the Midnight Cowboy theme that became a mega-hit for Harry Nilsson. But it was just one of many for Neil, who seemed headed to major stardom during the 1960s but spent most of the last 30 years of his life in quieter pursuits. 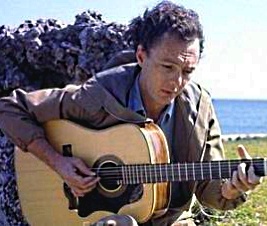 Born in Cleveland and raised in Florida, Neil was exposed to music in an unusual way — his father was a jukebox salesman. By the the time he reached adulthood in the late 1950s he had made his way to New York, where he worked as a songwriter and sold tunes to guys like Buddy Holly and Roy Orbison. He even recorded some rockabilly himself, but within a few years had become part of the burgeoning Greenwich Village folk music scene.

During the early 1960s he continued to write songs while also forming a singing partnership with Vince Martin, and began to hit the recording studio with regularity. Although his records didn’t become chart-busters, he quietly built a solid core of fans — and many of them were his fellow musicians.

By the 1970s, Neil was starting to withdraw from the music world and immerse himself into another passion — the plight of dolphins. He relocated to his home in Florida, and even though he would continue to appear from time to time, most of his efforts went into supporting an organization he’d help start, the Dolphin Project. He died of natural causes in 2001, but is still revered by many music fans and lovers of nature.

8 thoughts on “The Enigma Of Fred Neil”