When I think about ukuleles — and trust me, it’s not something I do every day — a couple of different images form in my mind: Tiny Tim strumming his instrument on Johnny Carson’s Tonight Show, and Elvis playing (?) a uke in one of his Hawaiian movies. But I’ve been reading recently that ukuleles are making a comeback, so maybe they deserve a closer look. 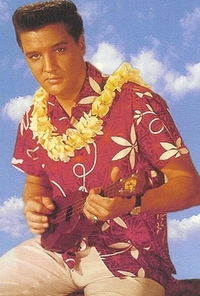 I’m sure it won’t surprise you to hear that I’m not the kind of guy who follows — or even knows about — the latest trends, but I do find it interesting that ukuleles are getting popular again. In fact, there are even clubs of uke aficionados in many cities, some with as many as 1000 members. There are lessons available, special websites, gatherings called ‘ukefests’, and — of course — ukes are all over Facebook, too.

Apparently ukes have a lot going for them. They’re easy to learn to play and they’re reasonably priced — a new one can be had for $40, although you can pay several hundred dollars for one if you’re so inclined. They come in a variety of styles and sizes, and there is also a whole subculture of antique uke collectors.

According to wikipedia, the ukulele (which means ‘jumping flea’) did not actually originate in Hawaii, although there’s little doubt that its history there goes back well over a century. It is instead thought to have evolved from a couple of similar instruments played by Portuguese immigrants. Whatever the case, it’s enjoying a rebirth.

(Note: track starts with surf sound, so be patient.)

Best Hit Uke – “Wake Me Up Before You Go-Go”

6 thoughts on “Show Me Your Uke”