Fans of modern country music are often familiar with the names of many of the earlier stars, but I’d be willing to bet that few would guess the name of the singer who had the first number-one country hit for a female. It wasn’t Loretta or Tammy or even Kitty. It was Patsy Montana, who hit the top of the charts all the way back in 1935 with her classic song, “I Want to be a Cowboy’s Sweetheart.”

Patsy Montana was born as Ruby Blevins, part of a large farm family that was located in the same part of Arkansas that would later produce Bill Clinton. In fact, she went to school in his home town of Hope, but it was music that interested young Ruby, not politics, and she not only learned organ, violin, and 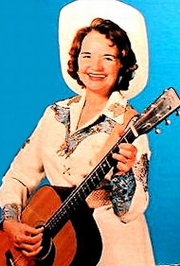 guitar, but also singing — and yodeling.

The latter talent would come in handy when she began to appear professionally in California in the early 1930s. She performed as Rubye Blevins (hoping the extra ‘e’ would add pizazz) and called herself ‘the Yodeling Cowgirl from San Antone’, because it sounded more Western than Arkansas. She was soon appearing regularly on radio, and before long had become part of a singing group that called itself the Montana Cowgirls, later taking the name Patsy Montana for herself.

Eventually she moved back to Arkansas, appearing on regional radio and also catching the eye of country singer Jimmie Davis. The popular Davis (who would later become governor of Louisiana) gave her the opportunity to gain experience in the recording studio, and before long she was making her first solo record, “When the Flowers of Montana Are Blooming.” Soon after, she won a spot on Chicago radio station WLS’s enormously popular country music show, National Barn Dance. That show and WMS’s Grand Ole Opry from Nashville were the two biggest forces in country music at that time.

Patsy Montana would be a regular on the National Barn Dance for many years. (You can see a rare video of her performing in the early 1950s below.) But she’d also be a recording star, usually backed by her group, the Prairie Ramblers. Her monster hit, “I Want to be a Cowboy’s Sweetheart”, would lead to many other popular records, including “Rodeo Sweetheart,” and “Montana Plains.” Most of her songs seemed to follow the same theme, with titles like “I Only Want A Buddy Not A Sweetheart,” “I Wanna Be A Western Cowgirl,” and “I Want to Be A Cowboy’s Dreamgirl.”

She would go on to a long musical career and would even make a few appearances in Western movies, where she would usually portray — you guessed it — the cowboy’s sweetheart. She would remain active in the music industry for several decades, turning more and more to gospel music in her later years. She died in 1996, at age 87.

4 thoughts on “Patsy Montana Did It First”