In a recent piece about James Darren, I mentioned that many of the rising young actors of the era were also promoted as singing stars, but one that might surprise you is a guy who is now better known as a legendary superstar and director. That’s right, folks. Clint Eastwood was once one of those young actor/singers.

It’s not as far-fetched as it might sound. In later years, Eastwood would sing in movies like Paint Your Wagon and Honky Tonk Man, and he’s always been interested in music. He’s produced and directed musically-themed films like Bird, has been 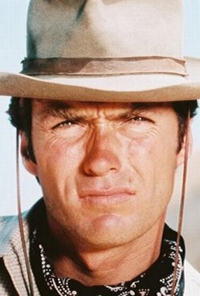 involved in composing, and is a pretty good instrumentalist too.

The younger generation might not know about the TV show that made Clint a star but most of us will remember Rawhide, a very popular Western that ran from 1959 to 1965. In addition to having an instantly recognizable theme song (made famous by Frankie Laine) it was filled with lots of cattle and a number of interesting characters. Among them was a young firebrand of a ramrod, Rowdy Yates, played by Eastwood.

When the young actor became the breakout star of the show, plans were made to also promote him as a singing star, but record producers decided to play it a little safe by having him make an album of cowboy songs. Most were traditional Western tunes but one was newly-written to pay tribute to his Rawhide character. (Video below.)

Although Eastwood was not much of a crooner, he had a soft, pleasant voice that one critic described as a cross between Roy Rogers and Dean Martin. But even if that was overly generous, one thing could certainly be said about his vocalizing in those days. It was better than the nails-on-a-blackboard singing voice we would probably hear from today’s Clint Eastwood.