Although its beginning might be reminiscent of the Marcels’ “Blue Moon,” Johnny Cymbal’s hit record of “Mr. Bassman” had a personality of its own. But even though Cymbal’s signature song helped make him a teen idol in 1963, a later piece — performed under a different name — would end up being his biggest hit.

Born John Hendry Blair in Scotland, he moved with his family to Canada and later Cleveland, where he spent most of his formative years. Adopted by his mother’s second husband, Nick Cymbal, young Johnny — who was inspired by Elvis Presley — began to pursue a musical career while still in his teens. As a talented songwriter 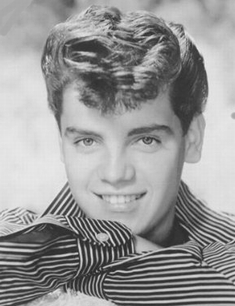 who could also sing and play guitar, he was soon able to sign a record contract and began to hit the studio.

Cymbal was unable to make much headway at first, but things began to come together in 1963. In addition to “Mr. Bassman,” he also charted with “Teenage Heaven” and “Dum Dum Dee Dum,” and it looked like he was on his way. Unfortunately, more hit records were hard to find even though the multi-talented Cymbal found plenty of work as a musician and record producer.

Over subsequent years he would move from one record company to another and even record under different names, searching for success. Eventually he would be perform under names like Milk, Taurus, and Brother John, but it was as Derek — hit brother’s name — that he would again hit the charts in a big way. Although his brother was actually in the band for 1968’s “Cinnamon,” Johnny did the singing on a song that would be his biggest hit.

Although he would continue to perform over the next couple of decades — even as part of a duet for a while — Cymbal would eventually find his most success as a songwriter for other performers. Among those were Gene Pitney, Terri Gibbs, and even his idol Elvis, for whom he wrote “Mary In The Morning.” He eventually settled in Nashville where he died from heart problems in 1993, just 48 years old.