Whew. I just listened to a little piece called “Nashville Pickin’,” by a multiple Grammy winner who is among the best to ever pick up a guitar, and yet he remains a relative unknown to many modern country music fans. Maybe that just says something about the direction country music has moved in recent years, but it would certainly be nice to see a little more appreciation sent the way of Doc Watson.

Which is not to say that he’s been completely unappreciated. A Grammy winner in every decade since the 1970s, for many years he’s had the admiration and respect of a lot of knowledgeable fans, and has reached nearly God-like status with just about every professional guitarist around. He’s considered one of the all-time greats of the acoustic guitar, along with his contemporaries (and buddies) Chet Atkins and Merle Travis.

Arthel Lane Watson was born in North Carolina, and had the dual disadvantage of  losing his sight to illness while still very young and spending much of his childhood in the 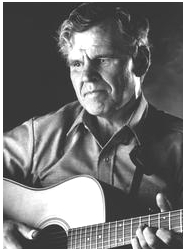 midst of the Great Depression. On the plus side, his family was strong and supportive and he grew to adulthood well-equipped to follow the path mandated by his musical talents.

During World War II and in the years following, Doc performed in relative obscurity nationally, although he did work regularly in everything from radio to county fairs, showcasing his guitar and his strong, natural singing voice. But even if he wasn’t hitting the big time during that period, he was busy in other ways. For one, he was building a family, and as he and new wife Rosa began to have children he found that his father-in-law, country fiddler Gaither W. Carlton, was a good source for another of Doc’s interests. He soon began building what would become his encyclopedic knowledge of traditional American music.

By the 1950s, Doc had begun to play electric guitar in addition to acoustic, and as he performed in various groups he even found himself occasionally playing a little rock and roll. But by the end of the decade he’d moved back closer to traditional country and folk music and had pretty much decided to stick to acoustic guitar, although he’d added banjo to his skill set. The stage was set for his breakout, which came via his appearance on the 1960 album, Old Time Music at Clarence Ashley’s. Ashley was a folk music icon from an earlier era, but he’d had some recent successes that allowed him to put together a recording session with Doc and a few others. Even though the two would continue to work together from time to time, it was this landmark album that played a significant part in Doc’s march to stardom.

In the decades since, Doc has enjoyed success after success, including star turns at folk festivals and appearances with many of the biggest names around. In addition to working with his fellow guitar virtuosos A

tkins and Travis, he’s also shown up in highly visible guest spots such as performing on the Nitty Gritty Dirt Band’s seminal 1972 album, Will the Circle Be Unbroken.

He also helped give a start to his talented son, Merle Watson, and the two performed together for many years, including a period as a trio with bassist Michael Coleman. (Video below.) Unfortunately, Merle died in a tragic accident at the family farm in 1985, but even though that slowed Doc a little, this much-honored national treasure  eventually continued doing what he still does better than almost anybody — making music.