The first thing that comes to mind when listening to Hilary Kole’s solo debut, Haunted Heart, now out on the Justin Time label, is amazement that it’s a debut album. Her crystal-clear voice and perfect timing, combined with some solid backing from a group that includes guitarist (and producer) John Pizzarelli, provide a polished and professional listening experience.

Although this is Kole’s first solo album, she’s far from unknown. She has a solid background of singing alongside some of the best, and has been hailed 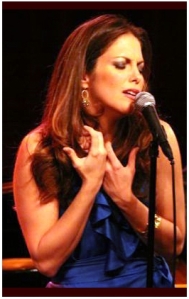 for her work in off-Broadway appearances. She’s also shown up as a featured performer at various special events, has numerous special appearances on both regional and national TV, and I think she might be walking dogs and directing traffic in Times Square too. (Just kidding…I think.)

She’s been compared to Anita O’Day and Blossom Dearie, and even includes one of the latter’s songs, “You For Me,” on this album. But she also reminds me of one of my favorites, Stacey Kent, with her ability to add a playful touch to her straight-ahead style. A good example is “It’s Love,” an old but seldom heard standard given a lively treatment by Kole.

The baker’s dozen tracks on the album include several similarly old songs that you won’t hear every day, and that’s a nice plus. One of those — probably my favorite here — is Rogers and Hart’s “There’s a Small Hotel,” which is just a delight as performed by Kole. I also enjoyed “What’ll I Do,” an Irving Berlin classic that’s been neglected by most modern singers, but is revived by Kole in a winning performance.

There are a few surprising choices too, and Kole shows plenty of versatility in her interpretations of various types of songs. Tom Waits’ “Old Boyfriends” takes us in a slightly different direction but is a good listen, and I especially enjoyed “The Snake,” a deadly fun piece written by Oscar Brown Jr.

An outstanding debut album for Hilary Kole; highly recommended for just about anybody who enjoys good music performed by talented musicians.