Pop music in the 1960’s sometimes seemed to be all about bands like the Beatles, the Rolling Stones, and others — an era that came to be known as the British Invasion.

But there was also a secondary effect. Many of the American groups scrambling for success during that period found themselves – consciously or not – emulating the British bands. In some cases, they were so good at it that fans just sort of assumed the group was British — or at least they did until they got to know the guys a little better.

The Beau Brummels had a name that certainly sounded English, and their clothing and haircuts seemed to suggest it too, but they actually 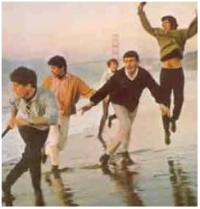 started in the Northern California area. Nevertheless, the Beau Brummels (along with their better-known contemporaries, the Byrds) helped establish folk-rock and country-rock as part of the pop music scene.

Discovered playing in a club in suburban San Francisco and signed to a recording contract, the group was anchored by guitarist Ron Elliott – who also wrote most of their music – and lead vocalist Sal Valentino. John Peterson, Ron Meagher, and Declan Mulligan (who was Irish and therefore the one British member of the group) were also part of the group at that time.

Although they continued to perform and record through some personnel changes, and had solid sales on songs such as “You Tell Me Why” and “Sad Little Girl,” the band began to wind down later in the decade. In the mid 1970’s, some of the original members formed a group called Stoneground, and had some good record sales before fading. These days, the most active of the original guys appears to be lead singer Valentino, who maintains a website and is still performing.