One of the quirkiest musical stories of the 1950’s had to be that of the singing sisters known as Patience and Prudence. Their first two recordings reached hit status in the same year and that made them pretty special, but the really surprising part is that the young ladies were only 14 and 11 years old. 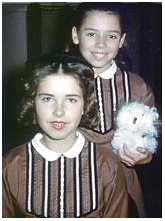 The girls were the daughters of a professional musician, a pianist named Mark McIntyre, who one day heard them singing a song they’d learned at summer camp. The girls’ trilling voices and unusual harmonies intrigued him. Even though he recognized the old Billy Rose song they were singing, he’d never heard it performed quite that way.

Deciding to do something with his discovery, he made a demo recording that eventually led to interest from Liberty Records. Professionally re-recorded with extra dubs to help strengthen the sound of their young voices, “Tonight You Belong To Me” hit the record stores in early 1956. (Video below.)

On the ‘B’ side was a song written by Dad, “A Smile and a Ribbon,” but it was the girls’ song from summer camp that attracted the most attention. The record soon began to climb the charts and ended up becoming a huge hit for the young duo.

Fans were charmed by the girls and their unique sound, and the twosome’s popularity led to a number of appearances, including one on the Perry Como TV show. They soon hit the recording studio again, and their next record, “Gonna Get Along Without You Now,” was another best-seller although it didn’t quite reach the heights of their first hit.

Unfortunately, those two records would prove to be the high point of their singing career. The girls did continue to make recordings for a while but sales were disappointing, and they eventually left the music business behind, returning to normal lives in the real world.