Just in time for holiday giving – even if only to yourself – is a new 3-CD collection that just might make you feel like strapping on your shootin’ iron and saddling up your ol’ cayuse — if you have one, that is. These days most of us get our transport from the horses under the hood of our cars and trucks, but apparently we haven’t lost our taste for the Wild West. Rodeo is booming, and the 50th annual NFR (National Finals Rodeo) is starting in Las Vegas soon. To commemorate the occasion, Sony/BMG is issuing Boots, Buckles & Spurs, a boxed set of 50 Western songs with a definite rodeo flavor. 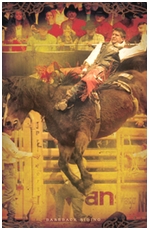 Rodeo has grown a lot since the days of dirt-poor cowboys risking broken ribs to make enough money to save the ranch from the dastardly banker. It’s a big entertainment draw now, with an ever-increasing fan base, rising TV ratings, and tons of events that culminate in the big one in Las Vegas. How big, you ask? Modern cowboys can now risk cracking those ribs for prizes that total up to $6.5 million.

But we’re here to talk about the music, and it’s a chuckwagon full of tasty songs from a huge roster of country music stars, stretching from the early days of singing cowboys to some of today’s biggest headliners.

The collection begins with Gene Autry’s “Back In The Saddle Again,” and includes a few other old chestnuts, but if those are a little before your time don’t get your chaps scuffed up. There are plenty of modern songs, including the official theme of this year’s rodeo, “Cowboy Town,” performed by Brooks and Dunn.

Historically, cowboys and music go together like hardtack and beans, but it’s still a little surprising that the producers of this set have found so many pieces that relate to rodeo, or are at least reminiscent of ridin’ and ropin’. Some of those included are a little predictable but are still great songs. You can’t really go wrong listening to Willie Nelson singing “My Heroes Have Always Been Cowboys,” or Merle Haggard’s “All American Cowboy.”

Some of the inclusions are pleasant surprises but make perfect sense. Vince Gill’s “Oklahoma Borderline” is a nice listen, as is “Someday Soon,” Suzy Bogguss’ version of a Sylvia and Ian classic. Still others make dead-solid perfect connections, with songs such as “Hooked On An 8 Second Ride” by Christ LeDoux leading the way. It’s an especially poignant piece because LeDoux was a former rodeo champion turned country music star, and he died in 2005.

On the other hand, there are some very light-hearted tracks, none funnier than “That Buckin’ Song” by Earl Robert Keen. If you’re not familiar with the piece, I think you’ll find it impossible to listen to it without cracking a smile. (If you’ve heard it before then you already know what I mean.)

Among the most familiar inclusions is “Wildfire,” Michael Martin Murphey’s huge hit from the 1970’s, but there are dozens of other good tracks here — way too many to list, but you can follow the album link for a complete listing including sound clips. I’m betting the ranch that this collection will hit the bulls-eye with you, partner. It did with me.