I seem to be on a kind of ‘easy listening’ tear lately, spinning out a article about Frank Chacksfield a while back and a few others before that, so it seems – er – easy enough to continue down that road for a while. And even though Chackfield’s name might have been a little unfamiliar to some, I’m willing to bet that Percy Faith will be remembered by almost everyone.

Although the Canadian-born star reached his biggest fame as a Grammy-winning arranger and musical director, he was a piano prodigy as a child, and by the time he reached his teens was playing professionally. Unfortunately, his hands were badly injured in a fire and that effectively ended his playing career — but it didn’t keep him from moving into 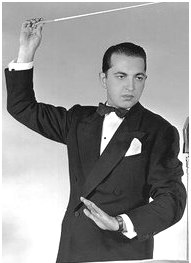 In the years leading up to World War II, the young musician managed to work his way up through the Toronto music scene via club and hotel orchestras and eventually radio. Along the way, he developed his pop-instrumental style, which helped make his radio show a hit for CBC. However, by 1940 Faith had become unhappy with the penny-pinching network and was ready to try his luck in the states.

He spent the next few years in New York, and by the end of the war had become a US citizen. He was also working regularly, arranging and conducting on NBC, while starting to make a name for himself in the recording industry. In 1950 he was named musical director at Columbia Records, which began a long period of successful collaboration.

Over the next two decades Faith worked with dozens of stars, including Johnny Mathis, Doris Day, Tony Bennett and others, and also sold a huge number of records as the leader of his own orchestra. His approach to music was a hit with listeners, but he continued to expand his repertoire. His fascination with Latin music led to his first number one single, “Delicado,” in 1952, and he was soon looking at Broadway tunes and movie music too.

In 1960, he recorded “Theme From A Summer Place” and it not only ended up as his second number-one hit, but also won the Grammy as Record Of The Year. A huge hit – his biggest – it’s still probably the song he’s most remembered for, but he continued to be popular for many years. In 1969 he won another Grammy, for the “Theme From Romeo And Juliet,” but by then he’d begun to slow down a little. He continued working occasionally until his death in 1975, and left behind a legacy as one of the pioneers of ‘easy listening’ music.