A new issue from Motema Music is a little bit of a different animal. Dal Vivo A Umbria Jazz features jazz guitarist/vocalist K.J. Denhert in a collection of live performances from the Italian Umbria jazz festival. It’s a follow-up to her successful Lucky 7 album from earlier this year and includes some of the same songs — but extended live versions.

For over a decade Denhert, who is also a talented songwriter, has been building a steady reputation among fans. She’s joined here by guest star Aaron Heick, who brings his sax wizardry to a band that includes some of 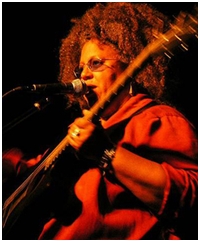 Most of the tracks on this collection are Denhert’s own compositions, along with a few interesting choices from the world of pop music. Among the latter are Sting’s “Message In A Bottle,” and “Ticket To Ride,” in a version that strays far away from the Beatles’ original but provides a unique listening experience with its urban jazz sound.

Also included is an old standard that might surprise some by its inclusion, but hearing Denhert’s smokey voice and acoustic guitar play on “Over The Rainbow” is a delight, and Heick’s occasional sax turns add to the pleasure. To me, it’s the best track on the album.

My favorite among Denhert’s originals is probably “All These Things,” with it’s Latin-flavored beat and strong solos from both the composer and Heick. But it’s just one of the many good listens here — overall, an album well worth trying.