Two of the busiest guys around the jazz world would have to be the pair who head up the Stryker/Slagle Band. Guitarist Dave Stryker and saxophonist Steve Slagle probably meet themselves coming and going, with busy schedules that include solo albums and appearances in other groups, but it’s always a special treat when they come together and kick out another SSB album.

The Scene, now out on the Zoho label, is a followup to 2007’s Latest Outlook. Once again the guys have enlisted the talents of tenor sax 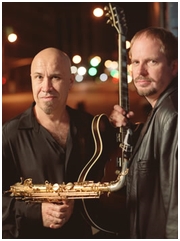 wizard Joe Lovano to merge his sound with Slagle’s alto and soprano play on several of the tracks. They’re also once more joined by bassist Jay Anderson, but this time around Victor Lewis takes over the drumming duties.

As always, the music is first-rate, mostly all post-bop originals from the two leaders of the band, featuring the smooth blending of sax and guitar that fans will recognize. The one exception is “Fingers In The Wind,” a piece written by legendary multi-instrumentalist Rahsaan Roland Kirk. Slagle picks up his flute for the lead here and does a good job, although the song itself seems a little out of step with the rest of the album.

Among the best of the rest are the title song itself, which shows off the ensemble sound of the group, and “Hopewell’s Last,” which features some nice interplay between Lovano’s tenor sax and Slagle’s soprano on a ballad written by the latter.

My favorite here was probably “Kindred Spirits,” one of the pieces without Lovano, but I’m not recommending it for that reason — far from it. However, it is possible that the makeup of the smaller group allowed Slagle to enjoy a little more freedom for his alto play, which is outstanding. Also, Stryker turns in some of his best acoustic guitar licks.

A good collection from the Stryker/Slagle Band — worth a listen. (Follow link for samples.)