Close on the heels of his success with 2007’s The Path To Infinity, tenor sax wizard Todd Herbert brings us The Tree Of Life, again on the Metropolitan label. With his newest, he’s once again offering up a mix of contemporary jazz with a post-bop touch.

Herbert has been playing professionally since the early 1990’s, with stints in the Charles Earland Quartet and later, trumpeter Freddie Hubbard’s quartet, all providing valuable experience for an already-talented young saxophonist. Originally a clarinetist and then an alto saxophonist, he switched to tenor after discovering the legendary John Coltrane, who remains his inspiration. 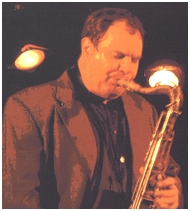 Herbert is joined here by Anthony Wonsey, a skilled pianist who also happens to be a long-time friend from his native Chicago, bassist Dwayne Burno, and drummer Jason Brown. All have played together many times, and their comfort level is obvious as they work through the seven tracks here, all composed by Herbert.

Opening the album is one of the best, “Look Into The Abyss,” which showcases Herbert’s playing skill in a fast-moving piece that’s almost reminiscent of the an earlier pre-bop age. It’s followed by “Maharishi,” a piece that creates an entirely different and intriguing sound that seems to combine an Eastern feel with a touch of a Latin beat.

The diversity of music on the album is demonstrated by the inclusion of “Do This,” with its quick pace and post-bop improvisational solos, and “I’m Down,” an appropriately-titled, deliberately paced piece of bluesy material that nevertheless furnishes some of Herbert’s best solos. Probably my favorite on the album.

Just a closing thought. All three of the pros backing up Herbert are outstanding, and turn in some nice solos of their own – especially drummer Brown – but this is Herbert’s show. Good stuff from a rising star — recommended.