Although he’s still only in his twenties, jazz keyboardist Aaron Parks has already put together an impressive resume. He has a background that combines formal musical training with playing next to some of the best, and already has several albums to his credit. Invisible Cinema, his newest effort and his first for Blue Note, will almost certainly add to the momentum he’s already built up in his brief career.

Parks, who has spent much of his recent career playing alongside celebrated trumpeter Terence Blanchard, has been called a ‘new visionary’ by JazzTimes. He’s a keyboard virtuoso who combines influences from a variety of sources, including classical music, progressive jazz, and indie rock, 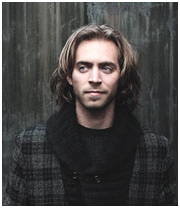 resulting in some unique musical expressions.

Joined by guitarist Mike Moreno, bassist Matt Penman, and drummer Eric Harland – all talented performers in their own right – he’s put together a 10-track collection of his own compositions that will appeal to a lot of listeners, especially those looking for something new and a little different.

But even a traditionalist (like me) will find a lot to like here. Parks’ melodic keyboarding, supported by Harland’s skillful drums, makes a tune such as “Travelers” dance with virtual images, and another, “Riddle Me This,” allows bassist Penman to shine while Parks plays low and slow.

I also enjoyed the soft sounds of “Into The Labyrinth,” which is probably the purest example of Parks’ piano skills. Very nice. On the other side of the pendulum is the pounding rhythms and hypnotic guitar work on “Nemesis,” which gives Moreno the chance to show us why he’s one of the most admired guitarists around.

A good effort from Parks and company. Solid improvisational jazz with a touch of something new — exactly what a lot of adventurous music fans love to discover.