You gotta hand it to Sergio Mendes. The ageless Latin musical star has flourished for more than four decades, and even though he has plenty of ability himself, he’s been helped along the way by his unerring ability to choose some interesting musical partners. For his latest album, Encanto, now out on the Concord label, he embraces the practice with a vengeance and it might be his most eclectic album ever, although 2006’s Timeless began the process.

Rapper will.i.am produced both albums, and on this effort he’s enlisted the aid of fellow Black Eyed Peas singer Fergie, but there’s more going on here than hip-hop. Also present are a couple of ladies with strong R&B credentials, Siedah Garrett and Ledisi, and the Latin side is well-represented too, with singer Vanessa da Mata and percussionist 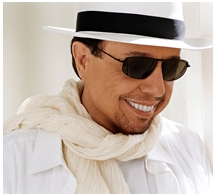 Carlinhos Brown turning in strong performances. And if some of those names are a little unfamiliar, the traditionalists among us (including me) will be happy to note that pop legends Natalie Cole and trumpeter Herb Alpert are also enlisted to help fill the album.

It might sound like an overload of disparate musical artists, but there are some good listens here. The foundation of the album remains the Latin music that Mendes has always performed, and by giving listeners mostly traditional tunes performed in new ways, he might open a few eyes – or ears – for fans of both kinds of music.

A good example is Jobim’s “Agua de Beber,” with will.i.am adding a decidedly modern sound to an old Brazilian standard, as he does to “The Look Of Love,” which features Fergie doing a creditable job with a song that’s certainly out of her normal comfort zone. He also brings his influence to “Funky Bahia,” which features some nice work by all but especially Garrett. (Video)

One of the best here is “Waters of March,” which showcases Ledisi’s vocal talents and the lady from New Orleans makes the most of her opportunity. Another Jobim composition, “Dreamer,” gives us the chance to confirm that Mendes’ old A&M Records partner Alpert is still blowing a pretty good trumpet. It’s a smooth and silky song that also features Alpert’s wife, vocalist Lani Hall, still in fine voice several decades after her debut with Brasil ’66. And don’t overlook Natalie Cole, who turns in my favorite performance on the album — yet another Jobim song, “Somewhere In The Hills.”

Overall, an unusual mix of music that might not appeal to some but I found it to be a mostly enjoyable listening experience.