In the early days of rock and roll a lot of different musical sounds were being heard, and they all helped form the mix that would eventually become a pop music revolution. Rockabilly, folk music, and a few other tasty treats were all part of the recipe, but one of the most important ingredients was R&B, and one of the many performers who helped add that necessary element was a guy who’d already done something along the same lines back in the post-war years.

In addition to having a really catchy name – and it was his real name – Ivory Joe Hunter was a multi-talented performer with a rich musical history, one that began with a musical upbringing in Texas. He 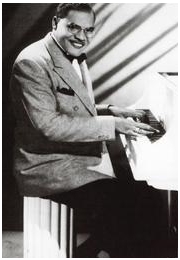 appeared on radio and records as early as the 1930’s, and during the war years was much in demand as a pianist, composer and singer, with a voice that has been compared to that of Nat King Cole.

Although it was the era of the big bands, most of his work came with smaller groups that specialized in early blues, and during and after the war he began to appear regularly on the charts. Some of his hits included “Blues at Sunrise,” and “Pretty Mama Blues.” It was during this time period that he’s given credit for introducing the blues to a lot of the mainstream listening public.

During the continuing evolution of music in the 1950’s, Hunter found that his style fit very well into what was happening. He continued to record and perform his kind of music and hit the charts with “It May Sound Silly” in 1955, but the following year brought his biggest success. His performance of his own composition, “Since I Met You Baby,” was a classic for the ages.

But he didn’t stop with that song — he continued to perform, and had several other good-sellers, including “A Tear Fell.” He also composed and recorded a tune that combined R&B with a country sound — “Empty Arms,” which not only made the charts for him, but was also a hit for many country singers, including Teresa Brewer and Sonny James.

He also had a hit record later in the decade with another country song, Bill Anderson’s composition, “City Lights.” It wasn’t that surprising for the versatile Hunter because he was at home with almost any kind of music, and also had success with gospel, jazz, and of course, the blues. He died in 1974 after a long and full career, and is remembered by knowledgeable music fans for his many contributions.

One thought on “Ivory Joe Joins The Revolution”